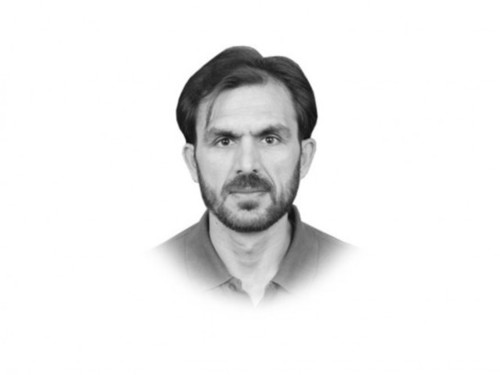 Kurram — limping back to normalcy By Naveed Hussain Published: December 31, 2011 The writer is national editor at The Express Tribune naveed.hussain@tribune.com.pk The Shia and Sunni tribesmen of the Kurram tribal agency are euphoric. The arterial Thall-Parachinar highway has reopened — quietly though, after a long, painful hiatus. Peace or at least a semblance of it, has returned to Kurram after four, long bloody years. If one is to believe an official tally, fighting in Kurram has taken nearly 1,100 lives since 2007 — though unofficial figures are believed to be far higher. Paradoxically, the Taliban share the credit for this ‘achievement’. A tug of war between dwindling supplies of money and foot soldiers and successive military operations has weakened the dreaded Tehreek-e-Taliban Pakistan (TTP) and apparently sapped its appetite for fighting, at least in Kurram. Once TTP commander in Kurram, Fazal Saeed Haqqani and his men have gone into hibernation in Uchat Kallay, the home town of Haqqani in the Sunni-dominated Central Kurram. In June 2011, Haqqani defected to form his own group — retaining the first two alphabets of the TTP and adding the suffix ‘Islami’ to it. However, little has been heard of his Tehreek-e-Taliban Islami since. Other TTP commanders, such as Mullah Toofan, Hafiz Daulat and Tariq Afridi, have also gone into hiding, like their boss, Hakimullah Mehsud, who has been isolated (apparently) by his once-trusted lieutenants. Elders from both Shia and Sunni tribes agree the sectarian discord in Kurram was stoked and exploited by the Taliban, who initially used the strategic region as an ideal transit into Afghanistan where they were fighting alongside their Afghan namesakes against the US-led Nato forces. “They’re to blame for our suffering,” says Haji Ghulab Hussain Turi, a Shia tribal elder who is now settled in Peshawar. After a long wait, Turi and his family managed to travel to Parachinar last month. For him, driving on the Thall-Parachinar highway after a long time was an “experience begging description”. Ostensibly, it was a truce agreed by the two communities in October this year at a jirga in Parachinar that led to the reopening of the highway. But surprisingly, in the past, a slew of major peace deals, the most recent one in Murree in 2008, failed to do that. Tribal elders also credit the ‘superior strategy’ of political agent Shahab Ali who, instead of going for one composite deal, pursued a step-by-step approach, brokering a series of peace agreements at the town and city levels to give the local population ownership of the deals. But let’s not forget the military, which mounted a successful targeted operation code-named ‘Koh-i-Safaid’, in July 2011, to flush out the Taliban who had fled similar offensives in South Waziristan, Orakzai and Khyber tribal regions to seek refuge in Kurram. But, I believe, that for this hard-won peace to last, a series of follow-up measures need to be put in place. First, thousands of families — both Shia and Sunni — displaced by years of bloodletting, should be repatriated to their homes. Second, necessary steps should be taken to bridge the trust deficit between the two communities. Third, petty tribal disputes should be settled because these, very often, balloon into bloody conflicts and assume sectarian colour. Fourth, the military squeeze should be sustained to check resurgence and regrouping of the TTP. And last, but not the least, the Pakistan-Afghanistan border in Kurram should be plugged to stop the infiltration of foreign troublemakers into the region. Published in The Express Tribune, January 1st, 2012.
Via tribune.com.pk