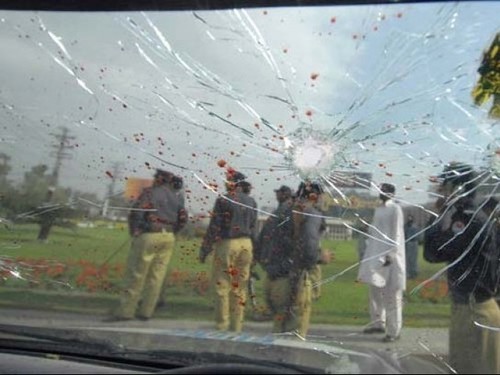 PESHAWAR / DI KHAN: Outlawed terrorist group Jundallah has claimed responsibility for an attack a bus on Karakoram Highway in the Kohistan district of Khyber-Pakhtunkhwa, which killed 18 people on Tuesday. Jundallah’s commander Ahmed Marwat, who contacted media persons soon after the attack, claimed responsibility for the assault.
The attack took place when gunmen opened fire on the bus which was en route to Gilgit from Rawalpindi with 39 passengers on board. The bus was owned by Mashaburum private bus service.
Seven armed men stopped two buses and a coaster. The armed men were reported to be in Army uniform. They asked the passengers to get off the bus and shot them after checking their CNICs.
Most of the victims were pilgrims who were going back to their native areas after visiting holy shrines in Iran.
A source in the district administration in Dassu told The Express Tribune that residents of Tangir’s Darkai valley, Commander Abdul Qayyum, Saddar Shariat and Burhan Shariat, sons of Gul Shahzada: Abdul Karim and Abdul Qadeem, sons of Abdul Ghafoor are suspected to be involved in the massacre.
Driver Muhammad Younus of Nagar valley, Najibullah, Suhail Ahmed are among the deceased.
“All the people on board were Shia, and at the moment it looks like they were targeted by armed men from the local Sunni community,” a senior police official had earlier told Reuters.
“Armed men hiding on both sides of the road attacked the bus,” local police chief Mohammad Ilyas said.
“Initial reports said 18 people have died and eight wounded,” he added.
Police officials said the bus came under attack in an area inhabited by two Sunni tribes about 165 km (102 miles) north of Islamabad.
The ambush happened near the town of Harban Nullah. DCO Chilas confirmed the incident.
The bodies of the deceased have been kept at Shatial hospital.
Local MP Abdul Sattar Khan linked the ambush to the murder of two Sunni Muslims a few days ago in Gilgit.
“The people of the area had vowed they would take revenge,” Khan told AFP by telephone.
Rehman Malik constitutes three-member investigation team
Interior Minister Rehman Malik constituted a three-member investigation team which will be supervised by the Deputy Inspector General of Hazara Division.
The team will comprise members from Federal Investigation Agency (FIA), Inter-Services Intelligence (ISI), Intelligence Bureau (IB) and police officials.
The team will produce an investigation report within three days.
President Zardari takes notice of the attack
President Asif Ali Zardari, while taking notice of the attack said that the injured admitted in the hospital should be facilitated with the best treatment.
President Zardari also sought an investigative report of the attack.
Schools in Gilgit to remain closed for three days: CM G-B
While speaking to Express News, Chief Minister Gilgit-Baltistan Syed Mehdi Shah said that he was in contact with the chief minister of Khyber-Pakhtunkhwa and that investigations were underway.
“We [G-B government] have alerted the army, Frontier Corps and police so that no other incident could take place,” said Shah.
He said that section 144 has been imposed in Gilgit, while schools will remain closed for three days
Via tribune.com.pk

Speech held on 23rd February 2012 for the Martyrs of Parachinar who were martyred on 17th February 2012 in a Suicide Attack.
Via islamimarkaz.com

Speech held on 23rd February 2012 for the Martyrs of Parachinar who were martyred on 17th February 2012 in a Suicide Attack.
Via islamimarkaz.com

A Separation – Official Trailer Simin wants to leave Iran with her husband Nader and daughter Termeh. Simin sues for divorce when Nader refuses to leave behind his Alzheimer-suffering father.
Via tribune.com.pk

Allama Saqlain Naqvi who was injured in a murderous attempt breathed his last on Monday.
He was principal of Jamia tul Huda. He was under treatment at Victoria Hospital Bahawalpur since he was injured on February 19 in an attack in Ali Pur.
The body is being taken to Ali Pur. The martyr’s namaz-e-janaza will be held on Tuesday afternoon.
Banned terrorist outfit such as Sipah-e-Sahaba/Lashkar-e-Jhangvi and their masters were reported to be behind his murder.
Shia religious scholars have asked the relevant authorities to take notice of his martyrdom and ensure arrest of and punishment to the terrorists forthwith
Via shiitenews.com 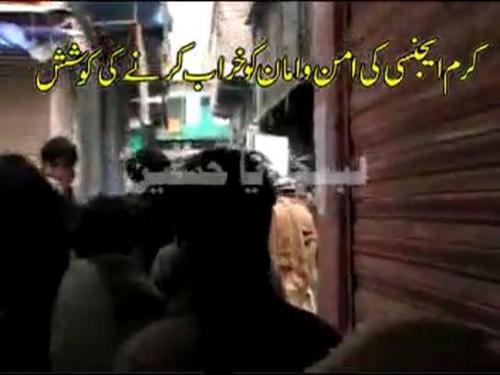 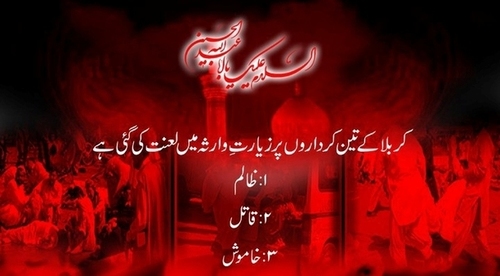 Progressive journalists’ silence on Shia genocide in Pakistan Dear @asmashirazi Any plans to cover Khanpur and Parachinar massacres?
Via criticalppp.com

Existence of Mehdi Militia ruled out Bureau report PESHAWAR: The leader of the Imamia Jirga and provincial general secretary of the Anjumn Tahaffuz-i-Millat-i-Jaffria, Akhundzada Muzaffar Ali, on Saturday said that no organisation by the name of…
Via scoop.it

Progressive journalists’ silence on Shia genocide in Pakistan Dear @asmashirazi Any plans to cover Khanpur and Parachinar massacres?
Via criticalppp.com