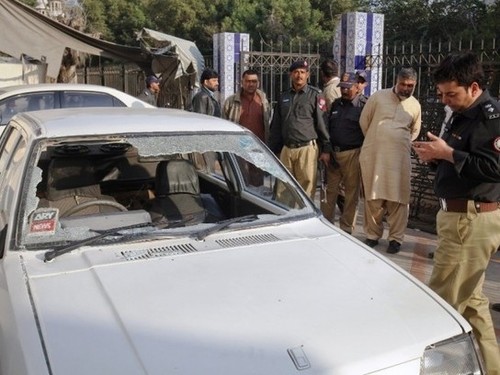 Acts of terror
By Editorial
Published: January 27, 2012 SCBA, other lawyers’ bodies to boycotted courts on Thursday in protest. PHOTO: REUTERS Hundreds of Shias died in targeted attacks across the country last year and most tragically, this year seems to be no different. The deadly process continues. Three Shia lawyers were gunned down in Karachi on January 26. On the same day, three other professionals — including an FIA official, an accountant and a poet — all from the Shia community, were killed in Quetta. Extremist groups are believed to be responsible and may well be deliberately targeting Shia professionals as means to spread terror amongst the community. The tactic has worked, with hundreds of professionals — notably doctors — who have fled the country after being targeted in this manner. This is a loss that is hard to sustain in a nation where professionals are badly needed. To add to the targeted shooting, there have been attacks on Shia processions such as the one taken out earlier this month in the town of Khanpur in Rahimyar Khan district, where Shias were mourning the 40th day of the martyrdom of Imam Hussain.
We all know who is behind the attacks; the rise of sectarian organisations in the Punjab in the late 1980s and 1990s is well-documented. Through the years these groups have split up, and re-grouped under different names again and again. The question is: why can’t more be done to go after them, both in their base in the southern Punjab and in other centres where they have spread like a virus against which we have no antidote. We need to tackle the issue head on. The fact that we have waited so long only makes matters more difficult. On a short-term basis, our intelligence networks need to determine how these groups operate, where they are based and devise a strategy to marginalise them. The increasing hatred and intolerance in society needs to be tackled and we need to end the targeting of those from the Shia community which is destroying so many aspects of life in our society, effectively tearing it apart. In the short-term, this means hitting those involved in such sectarian attacks with an iron fist. As for the longer term, this will have to involve a comprehensive overhaul of the national curriculum and regulation/monitoring of madrassas.
Published in The Express Tribune, January 27th, 2012.
Via tribune.com.pk