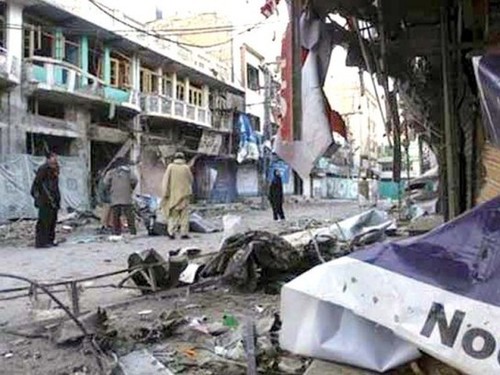 Parachinar bomb blast: Tribes to file FIR against Taliban faction leader
By Our Correspondent
Published: February 19, 2012 Residents walk past the blast site in Parachinar. PHOTO: FILE
KURRAM AGENCY:
Tribesmen of the Turi and Bangash tribes said that they will register a First Information Report against Fazl-e-Saeed Haqqani, leader of Tehreek-e-Taliban Islami, who claimed responsibility for the suicide attack in Parachinar on Friday.
Addressing a press conference on Saturday, tribal elders of the Kurram Agency said the security situation had been under control from 2007 till the end of 2011 – when the area was being controlled by volunteers – but the state of affairs turned violent just after security forces took control.
They said that when the responsibility of ensuring safety in the region was handed over to security forces, the political administration reassured that the situation will remain in control, but the bomb blast proves lack of efficiency and flawed arrangements of the forces. They urged the government to take action against security personnel, accusing them of targeting mourners in the aftermath of the blast.
They also said that Fazl-e-Saeed, who claimed responsibility for the attack, was in violation of the peace accord he signed to maintain peace in the area, pamphlets of which were distributed with his signature. The tribesmen asserted the need to take action against him because, if the situation worsened further, the responsibility will fall on the security forces as well as the political administration.
Published in The Express Tribune, February 19th, 2012.
Read more: shiakilling
Via tribune.com.pk