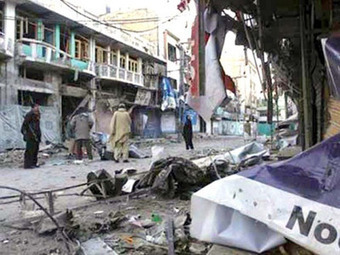 Carnage in Parachinar
FEBRUARY 22, 2012 RECORDER REPORT 0 COMMENTS
Just as a government-backed peace accord between the Shia and Sunni communities of Parachinar seemed to be making progress, a suicide bomber struck in the Kurrmi Bazaar soon after Friday prayers, killing at least 23 people, including three children, and injuring 37 others. Angry over the carnage and years of harassment, the local Shia community resorted to fierce protests to which the security personnel responded with live fire. Three more people lay dead and 12 injured as a result of the firing. A curfew was imposed in the town to prevent further trouble. A break-away faction of the TTP led by Fazal Saeed claimed responsibility for the attack saying “we have targeted the Shia community of Parachinar because they were involved in activities against us.” In Parachinar, capital of the restive Kurram Agency, Shias have a slim majority. Those familiar with the situation say that although tensions have always existed between the Shia and Sunni communities of the area, they have never got beyond the control of the local leaders and the administration. But the situation gradually worsened with the arrival about five years ago of the Taliban, who are dominated by extremists of hardcore anti-Shia persuasion. Violent clashes between the two communities since have caused hundreds of casualties. About 30,000 families, mostly Sunnis, left their homes to take refuge in other cities as well as camps for internally displaced people. And the Shia residents of Parachinar have been living under Taliban siege. Those who needed to travel due to reasons of some emergency had to take a circuitous route through neighbouring Afghanistan to get to Pakistani cities such as Peshawar. That journey was not without peril either; people could still be kidnapped or killed as the Taliban were active on both sides of the border. All this while, the government could do little to break the siege except for a brief period two years back. It needs to be noted that the Kurram Agency administration was able to achieve some success in starting the recent process of reconciliation between the two sects only after the opening of general negotiations between the government and the Taliban infesting the tribal areas. Reports also suggest that the Afghan Taliban faction, the Haqqanis, also used their influence to push an accord forward. For now the government must use its own means as well as its Taliban interlocutors to rein in irreconcilable violent extremists like Fazal Saeed’s group. But it must also focus on addressing the larger issue of sectarian hatred and the resultant violence that has spread to all parts of the country – be it Quetta, Karachi or other cities in Punjab and Khyber Pakhtunkhwa. That may be easier said than done, but it must be done in order to put this country on the road to peace and progress
Via brecorder.com