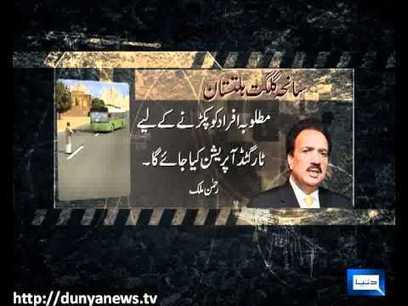 Interior Minister said that culprits involved in Kohistan massacre have been tracked. Chairing a meeting to review law and order situation in Gilgit-Baltistan, Rehman Malik said that investigation teams have tracked down the elements involved in the incident. On Tuesday February 29, at least 18 passengers were killed and seven others wounded when unknown assailants open fire on a bus near Harband Nala area of Kohistan. Interior Minister further said that local and foreign elements were involved in the heinous crime and their identities would be revealed to a local jirga, a tribal court, for their quick arrest. Malik stated that Peace Jirga along with the security forces would be reinstated to normalise situation in the area. The minister maintained that SP Kohistan has been transferred and no one would be allowed to disrupt peace in Gilgit-Baltistan.
Via youtube.com