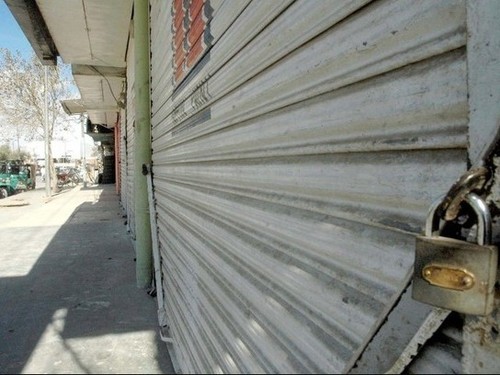 At least five people were gunned down on Thursday morning while six others were injured, when a van carrying people belonging to the the Hazara community was ambushed on Spini road.
The Hazara community continued their protest for the second consecutive day by staging demonstrations.
Addressing a news conference at Hazara Graveyard, the Vice President of the Shia Conference said that police have rounded up several people of the Hazara community during a peaceful protest. “We will not bury the bodies until the arrested Hazara people are released,” he said.
The strike call was given by the Hazara Democratic Party (HDP), Shia Conference and backed by Pakhtunkhwa Milli Awami Party (PMAP), Jamhoori Wattan Party (JWP) and other nationalist parties condemning the incident.
Trade and business activities in Quetta remained at a halt. All shops, trading centers, retailers and commercial establishments on Prince Road, Masjid Road, Liaquat Bazaar, Joint Road, Saryab Road, Alamdar Road, Hazara Town, Marriabad, Abdul Sattar Road, Zarghoon Road and others were closed.
Traffic remained thin and all street bore a deserted appearance.
Stringent security measures have been put on place with the heavy deployment of Frontier Corps (FC), police and other law enforcement agencies to thwart any unpleasant incident.
The Hazara community had staged a protest at the graveyard demanding an immediate arrest of culprits involved in targeted killings of the Hazara community.
The angry protestors burnt tyres on Eastern Bypass and raised slogans against the government and law enforcement agencies for their failure to protect the life and property of people.
A police official Mukham Raza was also killed during the violent protests triggered by the killings yesterday.
Police have rounded up dozens of suspects so far during their investigation.