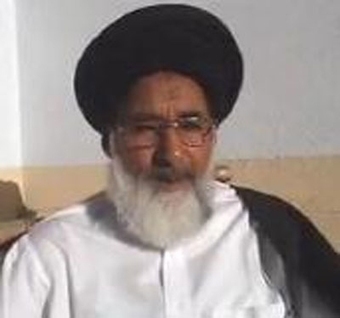 Former Senator Allama Abid Hussaini Condemns Parachinar Blast, Demands Termination Of Political Agent
Former Shia Senator Allama Abid Hussain al-Hussaini on Saturday vehemently condemned the suicide blast in Parachinar and termed that the government has completely failed to protect the lives of Common people of the Country. Addressing the press conference at Karachi press club , Shia cleric Allama Abid Hussain al-Hussaini demanded of the President Zardari, prime Minister Yousuf Gilani, Governor Khbyer-Pukhtoonkhawa, Chief of Army staff to take immediate action against the terrorists involved in the bloody bomb blast in Parachinar claims 36 lives. He underlined the need of immediate action against the personnel of armed forces over their indiscriminate firing on innocent Shia Muslims of Parachinar just after the bloody bomb blast. He vowed that the Shia Community would not bow down in front of evil forces saying that we are ready to sacrifice our lives for the sake of Islam and Pakistan and demanded the immediate termination of Political agent of Kurram Agency. Allama Abidi Hussaini questioned that why the law enforcement agencies and armed forces of the country would not hold any operation against the Taliban terrorists involved in the killing of thousands of innocent people of Parachinar and Pakistan. He condemned the attack of Nasabi terrorists of Sipah-e-yazeed on Shia House situated at Hassan Colony Karachi and condemned the Shia genocide in Karachi and rest of the country.
Via shiapost.com