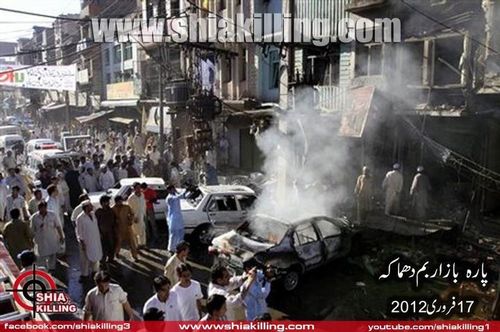 Peshawar—Tribal elders from Para Chinar Kuram Agency condemned the suicide attack occurred in the agency on February 17 and termed it failure of the political administration. After the suicide attack, the atmosphere of Para Chinar once again became bereaved as there was complete in peace agency because it was a big bomb blast after 2008, said they while speaking at a press conference on Tuesday. Allama Abid Hussain shakri, an Organizer Jamia Shaheed Allama Arif Hussain al hussaini, Saqib Bangash President ISO Peshawar Division, Haji Gulab Hussain Turi President Turi Bangash Supreme Council, Muzaffar alo Akhunzada (GS Imamia Jarga KP. Highlighting the situation in the agency, they said that the youth of the agency had voluntarily formed a Peace Committee Pasdaraan (PCP) who they added had themselves searched the people on all entrance and exit points to Para Chinar, and owning to which there was calm. No such mishap happened from 2008 to 2012, they claimed. The peace agreement in 2011, they said the PCP had vacated all the self-established check-posts on condition of protection to them in the agency and welcomed security forces with hope that durable peace would now be setup. They regretted that the main road towards Para Chinar had been closed for Turi Bangash tribes for four years while militants and other miscreants for their flee. They added the tribal people of Turi Bangash rendered sacrifices of 1500 people and 5000 injured by resisting the militants in the agency. “We not only defended our people but also our country,” they said.
Via pakobserver.net