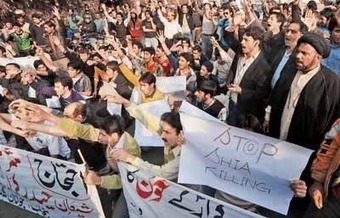 Murderers running amok
By: Mehmal Sarfraz Date: 2012-03-02 Place: Mumbai
Ads by Google
HDFC NRI Home Loans
Invest in a Dream Home in India. Hassle Free Experience Only at HDFC
HDFC.com/NRI_Home_Loans Ads by Google
Vivanta by Taj – Begumpet
Enjoy 15% Savings on Your Weekend Stay. B/f Inclusive Rate. Book Now!
VivantabyTaj.com/Begumpet_Hyderabad Without tolerance, our world turns into hell” — Friedrich Durrenmatt. A year ago on this day (March 2), Federal Minister for Minorities Shahbaz Bhatti was assassinated. His assassination took place less than two months after Governor Punjab Salmaan Taseer was shot dead by his bodyguard. Both of them were ardent supporters of minority rights. Both of them were vocal about the country’s archaic blasphemy laws. Both of them received death threats as a result. These threats were as real in Mr Bhatti’s case as they were in Mr Taseer’s. But both men were principled and fearless. In the end, both of them met the same fate. They were assassinated by fanatic butchers. Dissent on the streets: Pakistani Shia Muslims protest against the killing
of 19 Shias, who were killed in cold blood by men wearing military
uniforms In an interview with the BBC after Mr Taseer’s assassination, Shahbaz Bhatti said, “I was told that if I was to continue the campaign against the blasphemy law, I will be assassinated. I will be beheaded. But forces of violence, forces of extremism cannot harass me, cannot threaten me.” The debate on blasphemy laws slowly died down with Mr Taseer’s assassination. Mr Bhatti’s murder sealed the fate of this debate. Now people are afraid to raise this issue. Aasia Bibi, the innocent Christian woman accused of blasphemy and whose case was taken up by Taseer and Bhatti, is still in prison. Unfortunately, nobody in the corridors of power is now willing to raise their voice for Bibi’s release after what happened to Taseer and Bhatti. In this ‘land of the pure’, nothing is sacred — especially not human lives. Most of these killings are done in the name of religion. Religious extremism did not emerge out of a vacuum all of a sudden. It was nurtured, strengthened and supported by the Pakistani military and its intelligence agencies for their own vested interest.
Sipah-e-Sahaba Pakistan, Lashkar-e-Jhangvi (LeJ), Lashkar-e-Tayyaba (LeT) are just but a few examples of terrorist outfits created by the military and its proxies in the garb of ‘Islamic’ outfits. But in essence, these terrorist groups have nothing to do with Islam and its message of peace. They are serving their masters, i.e.
the military, while their masters allow them to do as they please. Shia genocide is another ‘mission’ taken up by the terrorist networks. This week, 19 Shias were killed in cold blood by men wearing military uniforms. According to the Asian Human Rights Commission (AHRC): “Though no militant organisation, who in the past were involved in killing the Shias, has claimed responsibility for the killings, the media has been accusing first one, and then another organisation in an attempt to cover up the alleged involvement of military men in the killings of members of the second largest sect of Islam. No statement of clarification has been forthcoming from the Pakistan Army about the men involved in the attack despite the fact that they were in military dress… The AHRC expresses the view that target killings give us a clear picture of the lack of accountability and transparency in dealing with the organised crimes done by militants organised backed by the intelligence agencies and law enforcement agencies.” This is an indictment and rightfully so. Banned terrorist outfits cannot work with impunity unless they have the backing of powerful quarters. In Pakistan, the most powerful institution is the military. Since these banned outfits serve the military’s purpose of jihad, cross-border terrorism, intimidation, harassment and whatnot, nobody bothers when they kill innocent Shias, Ahmadis, Christians, Hindus and Sikhs. Pakistan cannot progress without pluralism. Religious extremism has gnawed at the basic fabric of our society. To see lawyers showering a cold blooded murderer with rose petals or banning Shezan on court premises just
because Shezan is owned by the Ahmadiyya community shows how even educated people are turning into outright zealots. Add to it the military and its proxies, and we have the deadliest mix ever. It is time to roll back this madness. It is time to stand up to these murderers. The writer is a Pakistani journalist. Reach her at mehmal.s@gmail.com
Via mid-day.com