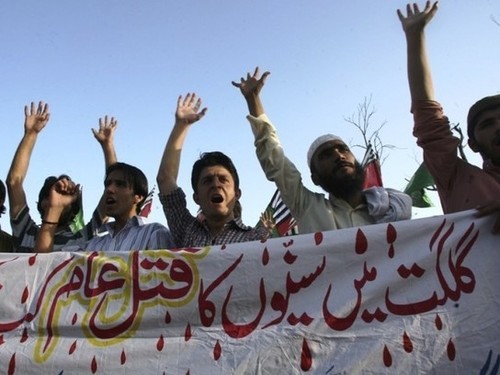 Hundreds of protestors took to the streets in Skardu, protesting the killings. PHOTO: AFP/FILE
In Gilgit-Baltistan (GB), the cities of Gilgit and Chilas have suffered sectarian violence, and so far 16 lives have been lost and dozens injured. Gilgit city experienced reactive violence from events taking place in Chilas suffering 6 killed and 40 injured. And Chilas avenged the Gilgit violence through frenzied mobs that killed nine innocent citizens. It was the banned Sipah Sahaba in its new incarnation of Ahle Sunnat wal Jamaat that started the violence in Gilgit while protesting the arrest of one of its leaders. A mob of thousands marched to Karakoram Highway, intercepted a convoy of buses heading towards Gilgit, and killed 10 passengers after a show of ID cards. This was a repeat of what had happened earlier in Kohistan in neighbouring Khyber-Pakhtunkhwa when buses travelling to Gilgit were intercepted and 16 Shia passengers were asked to disembark and then shot dead.
There is a pattern in sectarian killings in Pakistan whether one likes to see it or not. The minority sect of the Shia is first apostatised through fatwas by extremist clergy and then targeted by armed men, some of whom may have served as ‘mujahideen’ and fought the state’s proxy wars. GB’s administration is helpless, and the military moves in with its usual curfew and shoot-to-kill orders. The region has always been under the tutelage of the military because of the proximity of the Kashmir border and because non-state actors are usually affiliated with Sunni outfits. A similar situation exists in Kurram Aagency where the headquarters of the agency, Parachinar, is Shia-majority but gets in the way of the foreign terrorists (most of whom are Sunni) who take shelter in Pakistan and the local Taliban warlords going into Afghanistan. The Shia Hazaras of Quetta are being targeted by the same elements while in Karachi the steady rise of the sectarian Sunni terrorist outfits is having the same effect as well. Since the non-state ‘warriors’ are anti-American, the blame is put on a “foreign conspiracy” — something that all sides buy into because of a shared revulsion for America.
The demography of the region is as follows: Gilgit has approximately one million inhabitants equally divided among Shia, Sunni and Ismaili populations. Into this map walked in the jihadi-religious parties. What was changed by the intrusion of Pakistani religious conflict was the cement of qawm (caste), language and region which had kept Gilgit peaceful for many years and had help maintain a sectarian balance.
The Shia have been squeezed a bit by the increase in the Sunni-Pakhtun population through ingress and through unrestrained jihadi radicalisation. The war against the Soviet Union in Afghanistan set the ball rolling because the Shia were not accepted in Pakistan as mujahideen and there was a difference of approach to the Afghan war between Iran and Pakistan, the latter being allied to Saudi Arabia which headed an Arab reaction to Revolutionary Iran.
The Shia majority in the Northern Areas in no way disadvantaged Islamabad as it faced Ladakh on the Indian side. But the population began to be seen by General Zia’s regime as posing a potential threat after 1980. Sectarian violence began there in 1988 as a result of Islamabad’s Iran policy. In 1988, a Shia-Sunni dispute in Gilgit over Eid led to a Sunni lashkar that comprised thousands of people from Mansehra, Chilas (GB), Kohistan and other areas in the then NWFP. In the rampage that followed, hundreds, mostly Shias, were killed, scores of villages were pillaged and burned, and even livestock was slaughtered.
In 1999, it was on General Musharraf’s watch as army chief that Pakistan’s Kashmir jihad policy increased the ranks of Islamic extremists in the Northern Areas. The Kargil conflict resulted in the influx of Sunni jihadi elements into the region. Extremist organisations like Sipah Sahaba, Lashkar-e-Taiba, Jaish-e-Muhammad, Al-Ikhwan and Harkatul Mujahideen opened their offices there, upsetting the demographic balance.
Today the sectarian conflict — together with the rise of the 40-party Difah-e-Pakistan Council — is the most glaring symptom of state implosion brought on by internal loss of writ of the state and wilful international isolation.
Published in The Express Tribune, April 5th, 2012.