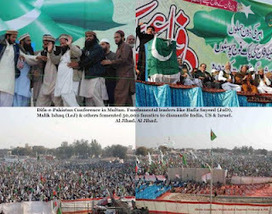 2009: ISLAMABAD: Former chief of the Inter Services Intelligence (ISI) Lt-Gen (retd) Hameed Gul on Saturday disclosed that the PPP could have got landslide victory in 1988 elections, if the Islami Jamhoori Ittehad (IJI) had not been formed. Talking to a private TV channel, he said: ìYes, we had such reports and apprehension of massive PPP victory.î Gul said they feared that the PPP was returning to power after the execution of Zulfikar Ali Bhutto. I take the responsibility of forming the IJI, though it was not my idea,î Hameed Gul said. He said that even during Benazir Bhutto’s first visit to the ISI headquarters he told her about his role in forming the IJI. “We wanted the PPP opponents who had affiliation with the GHQ to unite them on one platform,” Gul said. He said ‘emergency’ was one of the options in 1988 after General Zia ul Haq’s plane crashed, but it was decided to go ahead with November 16 election despite request from opponents of the PPP to postpone it. He disclosed that even former Soviet Union sent a message to Pakistan that the 1988 elections could be sabotaged. Gul said: “This is for the first time I am disclosing that former Russian president Mikhail Gorbachev sent his envoy with a message regarding apprehensions of sabotaging the 1988 election through foreign intervention.” He said he was not aware of the conditions to hand over power to former prime minister Benazir Bhutto, but said he was asked to brief her before she was handed over the power. “Benazir wanted a briefing from the Establishment so I was sent for this purpose and the meeting took place at her friend’s house in Karachi, which lasted over two hours, and I told her that the Afghan Jihad had not ended yet. There were two or three other things, which I briefed her and she said she understood the situation,” he said. He denied “Midnight Jackal” as intelligence plot and said it was Imtiaz’s personal plan. “No agency was involved but Imtiaz himself,” Gul said. The ex-ISI chief denied he ever sent a message to MQM chief Altaf Hussain to join IJI and rejected the allegation of former Intelligence Bureau director, Brig (retd) Imtiaz. “I never sent Imtiaz to Altaf with a message to join IJI but to express concern over allegations of collection of ìBhattaî by some elements,” he said. He predicted the victory of Afghans in Afghanistan and the US exit, but expressed concern over post-US Afghanistan situation and said a weak government was going to be set up there. “We failed to give up political system in Afghanistan after Soviet Union left and now I don’t see much will happen after the US exit, but Afghans will win,” he added. REFERENCE: Hameed Gul admits he formed IJI Sunday, August 30, 2009 http://www.thenews.com.pk/TodaysPrintDetail.aspx?ID=24196&amp;Cat=13&amp;dt=8/29/2009